Ringing for the Centenary of the WWI Armistice.

The Central European Association enjoyed another successful year in 2015 . We now have over 30 resident members living in various countries across Europe and we have also been very pleased to welcome several new members during the year  – some of whom have made a return to ringing after several years absence.

In addition to regular peal weekends during the year the CEA organised two main events for its resident members.    The AGM weekend was held in May at t’klockhuys in Dordrecht and was very well attended. 4 peals and 2 quarter peals were rung together with general ringing for all levels of ringers. Peter Richards rang his first quarter peal on tower bells shortly followed by his first quarter peal inside. A handbell peal of Yorkshire Surprise Major was also rung during the weekend being a first of Surprise in hand for Nicola Bright and a first of Surprise on an inside pair for Harm Jan de Kok.  Secondly, an Autumn meeting was held in November where peals followed by the customary drinking of Port and wine in t’klockhuys made for a very enjoyable weekend! Peals of Bristol and Glasgow Surprise Major were rung and also a peal of Yorkshire Surprise Major on Handbells  at The Postillion Hotel in Dordrecht.

A total of 60 peals were rung for the Association in 2015 of which 17 were on Handbells. One particular peal of note  was rung by a CEA residents band – a peal of Cambridge Surprise Major at Modautal – Brandau (Die Glockli), Germany  on 3 October to mark the 25th Anniversary of German Reunification . 24 quarter peals were also rung  at various locations in The Netherlands, Germany and Switzerland. Of particular note was a quarter peal of 4 Spliced Surprise Major rung at t’klockhuys and being a first quarter of spliced for Thirza de Kok.

It is a pleasure to report that our two youngest and ‘home grown’ members of the Association , Harm Jan and Thirza de Kok, continue to make tremendous progress with their ringing. Harm Jan has conducted several peals of Surprise major during the year and has recently rung a peal of Bristol Surprise Maximus in the UK.  Thirza can now confidently ring the standard 8 Surprise Major methods and has rung several Surprise Major quarter peals. A great achievement for both.

The CEA continues to welcome many visiting bands from the UK and we are also most grateful for their help and support throughout the year.

Ringing at ‘t klockhuys is by way of appointment only. For enquiries please contact Paul de Kok by email – p.m.dekok@hetnet.nl

Further details can also be found by visiting our web page www.change-ringers.eu/

ould resist the offer of a weekend away in Dordrecht in the company of The CEA with good food, cheese, beer, port, and wine in abundance…oh, and the odd peal attempt thrown in for good measure?? Well, it would seem not many as The CEA Weekend 28/30th November 2014 proved a resounding success with 22 members travelling from Germany, Belgium, France, Norway, and the UK to join our hosts in The Netherlands. With a Klockhuys almost full to capacity a fun weekend was had by all. Even by Dordrecht standards a rather extraordinary quantity of cheese was purchased and consumed during the weekend partly due to one of our party having a “meeting of the eyes” moment across the cheese counter with the proprietor of the stall requiring a return visit a little later on the Saturday…..say no more!

3 peals were scored. A tidy peal of Cambridge SM confidently conducted by HJ got the party started. A rather surprising success followed the next morning with Brian conducting a sparkling peal of Operation Market Garden – a rather tricky method for an early morning peal following the night before!!!….A bit of foresight on my part meant I successfully negotiated a swop with Dickon so was more than  happy to leave that one to the experts.It also meant that I could accompany Mike and Clive on a fact finding mission to Gouda where we discovered the delights of Patat met Mayo (chips and mayonnaise) and tried to list 10 famous Belgians – still working on that one. 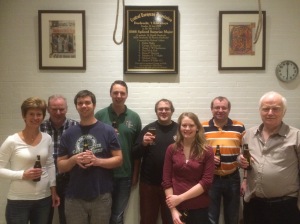 A delightful peal of 8 spliced S.M followed after lunch in which Cathy made it all look easy, the only slight kerfuffle occurring when the President suddenly remembered he had forgotten to buy not only the lemon but the tonic which he had promised he would organise for the ringer standing immediately to his right. Disaster was swiftly averted by Alban’s top of the form conducting and a good peal was secured – well done Cathy!  ( In hindsight the lack of a G&T at that stage of the proceedings was probably for the best….and was made up for later anyway in The Postillion, oops.)

A potentially controversial piece of business was discussed and masterfully concluded by Dickon proposing a compromise to the problem. This was resoundingly approved enabling the evening to progress in the time honoured fashion of taking Port with the President etc etc. Naturally this continued for some hours thereby enabling Clive to perform his party trick , though he did keep us waiting for quite a while….

The Sunday peals were both mysteriously lost. This had absolutely nothing to do with the previous evening……Happily after lunch and further sustenance a successful quarter peal was rung with Thirza ringing her first of Lincolnshire SM and once again making it all look straightforward – well done Thirza.

Finally – huge thanks to Paul and HJ for their committment and dedication to the CEA and for making these weekends happen. See you next time.

More pictures can be found here

On a sunny afternoon on the 11th of July, 8 ringers, residents from 3 different countries, using 4 different ways of transport, met in Tulloch. Before starting to ring a lovely lunch was made for us by Brian & Geraldine.

The weekend kicked off in fine style with a peal of 8 Spliced Surprise Major on the superb bells at Tulloch, followed by some cups of tea at the excellent catering facilities of Tulloch Farm. After the refreshments, part of the band drove to Inveraray where we met up with more resident CEA ringers, bringing the number of countries involved up to 5. This evenings venue, as to Inveraray experts won’t be a surprise, was the George Hotel. A lovely meal and some usual drinks were consumed before going to bed relatively early.

The following day was a day most of the band had been looking forward to for at least 18 months. A good breakfast was the start of this memorable day. After a relaxed morning walking around Inveraray, a 42 cwt ring of 10 was the afternoon challenge. Before we could start the peal the sound control and stabilisers had to be taken care of, and during which we also discovered that the rope on the 9th was about to break! so after quickly replacing the rope we were ready to start. A peal of Grandsire Caters was scored in a fine style and came round after 3hrs and 34 mins.

(http://www.inveraraybelltower.co.uk)
After the peal everybody was ready for some beers so we went back to The George. A few pints later it was decided to have a cultural excursion, so under the supervision of Clive most of us left the pub to go and investigate the whisky shop across the road! After coming back with some extra supplies for home, we all met up in the pub again for a few more pre dinner pints. The dinner in The George was superb ,and as tonight NO early night was required, after the meal and a few more beers and socialising, the extensive selection of whiskies in The George was tested…

The next day most of us had to leave early to catch there plane, ferry or train back home again. So after an ‘early’ breakfast we left for home again after a great weekend of ringing and socialising.

I would like to thank Brian and all others involved in the organising and conducting for this great weekend out!

Minutes of the AGM

Agreed by those present

End of meeting – time for Port.

The Central European Association – AGM weekend in Dordrecht, The Netherlands

As is now becoming a tradition, the Central European Association held its Annual General meeting in Dordrecht over the long Ascension Day holiday weekend, 29 May – 1st June 2014, and was attended by Association members travelling from Belgium, France, Germany, Switzerland, Norway and The Netherlands. Any visitor who has had the opportunity to visit ‘t Klockhuys in Dodrecht will enthuse not only about the wonderful ring of 8 bells there but also the legendary welcome extended by Dordrecht local ringers, Paul and Harm Jan de Kok. The AGM weekends are no exception to the rule and 4 days of ringing, eating and drinking all under one roof makes for a fabulous time for one and all.

The weekend kicked off in fine style on Thursday evening with a peal of Lessness S.Major followed by the usual refreshments and a relatively early night. Apart from general ringing and peal focus the CEA tries to arrange some form of cultural/social event during the weekend. This year, on the 70th Anniversary of “Operation Market Garden”, a visit was made to The Airborne Museum in Hartenstein near Arnhem – a mansion previously used by The British army as HQ in September 1944. The Operation was intended to bring about a speedy end to WW2 in Europe as thousands of Allied troops were parachuted into Arnhem. Sadly the plan was a disaster resulting not only in the deaths of 17,000 Allied troops but the almost complete destruction of Arnhem and surrounding neighbourhoods .The Museum had a fascinating if rather sombre display of the events including photos of the devastation caused. It was fitting that Association members then visited the Oosterbeek War Cemetery where many of those Allied troops  (mostly British and Free Polish) are buried. It is known that 3 bellringers from the UK who lost their lives during the battle are buried here and with information provided by Alan Regin the graves were located and handbells were rung at each graveside along with the laying of flowers. The names of the soldiers who died are as follows:

Back at ‘t Klockhuys the weekend continued in fine form with a peal of 4 Spliced S.M and one quarter peal of Glasgow S.M in the tower , 2 handbell peals of 8 Spliced S.M and Lincolnshire S.M, one handbell quarter peal together with general ringing. The business meeting held on Saturday 31st May highlighted the fact that the Association continues to flourish with 27 current members and advances were continuing to be made both in tower and handbell ringing. Unlike other Associations the challenging distances involved in organising ‘local’ ringing means that keeping things going does require some time and effort, and expense, on the part of members!! It is a credit to all that the association continues to grow.

Finally – no visit to Dordrecht is complete without the customary Port to get the party started.  So after the business was concluded the Port was consumed and the usual celebrations continued well into the evening – and for some carried on well into the night at the Postillion Hotel which fortunately is well accustomed to rather rowdy “apres bellringing” parties in their bar until all hours…!!! Some people being rather more rowdy than others of course…..!

Ringing at ‘t Klockhuys is by appointment only. If you are visiting The Netherlands or are perhaps living in Europe and we don’t know about you – please feel free to get in touch for details. Enquiries can be addressed to:

You can also find us on Facebook  – Dordrecht ‘t Klockhuys  – and we have a new website under construction – search under Central European Association.